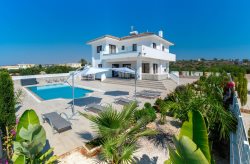 Agia Napa has been transformed from a sleepy fishing village into a lively resort that has something for all ages and contrary to popular belief, this cosmopolitan town isn't all about bars and clubs for the younger generation. If you look closely you will discover that Agia Napa is full of history and tradition, impossible for even the fussiest of visitors not to find something that would interest them. The center of the town is built around a medieval monastery.

Surprisingly this has been well preserved over the centuries and a visit here is like stepping back in time. Just to the side of the main square, traditional folk dancing takes place during the summer. At the end of September Agia Napa street festival takes place with singing and dancing performed for anybody who wishes to watch. Special acts from all over the world are brought to perform at the festival.

One of the most beautiful locations to visit in Agia Napa is the fishing harbour. Vast amounts have been spent on revitalizing the area. The entire harbour is pedestrianised with cafes and fish tavernas lining the area. At night beautifully designed lights light up the area, setting the scene for a romantic meal or a stroll along the harbour watching the moon float over the sea.

Frequently described as the ‘jewel of the Mediterranean’ Protaras is an elite beach resort on the south east coast of Cyprus. Just 45 minute drive from Larnaca international airport. Looked over by green rolling hills and the breath-taking church of Profitis Elias that stands over 100 metres high, the small town of Protaras has a magic all of its own. Golden white sands and sparkling blue waters as calm as the morning breeze make up some of the most enchanting beaches on the island.

This is where you can find rugged cliffs standing high over small bays and local fish tavernas serving fresh fish whilst you take in the spectacular views. A short drive inland will lead you to the scenic “valley of the windmills” here the blades help pump the water that irrigate this fertile land.

Protaras is also the home to beautiful Fig Tree Bay, considered one of the islands best beaches. The safe, shallow, crystal clear waters are ideal for sailing, windsurfing, water skiing, snorkelling and scuba diving. The roads in Protaras are of the highest standard with large pedestrian routes at the side of most routes. The entire length of the main costal road in Protaras which spans from Paralimni via Protaras and into Agia Napa is lined with a large pedestrian route that is ideal for walkers and bikers.

For those of you who prefer being closer to nature, there is a wooden path that can be followed around the coast, across rocky caves and secluded beaches where you will find small churches perched high on rocky landscapes overlooking the sea. Protaras has over 300 establishments ranging from, pubs, bars, cafes, jewellery shops, tavernas and much more.

The area of Profitis Elias is the most sought after residential area of the town and once you see the views you will know why. The festival of this chapel is the 20th July, a 2 day festival is held where the road is pedestrionised and stalls and cafes are set up selling traditional Cypriot food and sweets.

The palm tree promenade seafront of Larnaca bay bustles with cafes, tavernas, shops and bars. Its location is ideal as a base from which to get to know the central and eastern section of the island. The proximity of the international airport and a number of luxury hotels that have been developed along its sandy beached makes this a popular holiday choice.

Notorious for the beautiful salt lakes, and home to flamingos and other migratory birds. Larnaca was originally known as Kition, legend has it that it was the first settlement of Noah’s grandson Khittim. The church of St Lazarus which stands in the centre of the town is definitely worth a visit. The tomb of St Lazarus, who is still the patron saint of Larnaca is under the sanctuary.

Larnaca has managed to retain its relaxed, leisurely atmosphere. Its main shopping area is Zenon Kiteos Street, a busy road of small shops, with a colourful fruit and veg market at the far end.

Limassol and the area immediately around it, is home to enough cultural treasures to keep you occupied for a few days. In the heart of the city you will find the Cyprus medieval museum, housed in the imposing medieval fort where, in 1191 Richard the Lion heart married Berengaria of Navarre and crowned her Queen of England.

Some 19 kilometers west of Limassol is Kourion one of the most impressive archaeological sites not just in Cyprus but in the entire Mediterranean. To the east of the town is another important ancient city-kingdom, Amathous.

Do not miss a visit to the impressive medieval castle of Kollossi and its panoramic view from the top as well as drive through the vineyards and the orchards in the area of Limassol.

Cyprus is the third largest island situated in the north eastern corner of the Mediterranean Sea. It is an island divided into two parts, North and South Cyprus since 1974. Greek Cypriots occupy the south and the Turkish Cypriots in the north. A boundary known as the ’Green Line’ runs through Nicosia, the capital of both the north and south and is currently the only divided capital in the world. The present day capital of the island has a population of around 700,000.

The city went through major development during the Venetian’s rule, building huge, thick ramparts around the city. Nicosia (Lefkosia) was fortified with imposing stone walls and massive gates. The walls are three and a half miles long and have eleven towers and three gates. The famous Famagusta gate still stands today, proudly protecting the still ancient town within from the modern city outside.

The central Eleftheria Square links old Nicosia with its fine old houses, colonial buildings and tavernas to the elegant modern city that has grown up outside the walls. As the islands capital, modern Nicosia offers all the facilities you would expect, excellent hotels, restaurants, boutiques and nightclubs.

There are many things to do in Nicosia. To walk through the old city is a step back in time. Narrow streets and old houses with ornate balconies jut from weather beaten sandstone walls, and craftsmen in small workshops practice trades unchanged for centuries. Many old churches are to be found in this part of the town, and other places of interest are the folk art and Byzantine museums, the Archbishopric and the cathedral of Agios Ioannis with its beautiful frescoes.

The Cyprus museum is also popular with visitors. There is a priceless and fascinating collection of Cypriot antiques and art treasures from the Neolithic Age of the early Roman and Byzantine period. Visit the Cyprus handicraft centre workshops, where traditional arts are still accomplished today much the same way as they were in ages past.

Apart from the unique places of interest left from the ancient times, the present day Nicosia is a dynamic metropolitan city with highly developed infrastructure and an attractive modern look. The uniqueness of such combination makes the capital of Cyprus a place worth knowing and certainly visiting.

Without a doubt the 1000 year old capital should be on every visitors agenda. It lies roughly in the center of the island, within easy reach of the other towns.

Once the Roman capital of Cyprus, Paphos is listed by UNESCO as a world heritage site.

Paphos is blessed with a natural beauty that ranges from golden beaches and rugged coastlines to rolling hills and forest clad mountains, dotted with picturesque villages. An island chosen by the mythical gods and goddess of ancient Greece, where Aphrodite goddess of love and beauty, emerged from the Paphos foam.

This charming town is located on the west coast of Cyprus its focus is around an attractive harbor whose picturesque open air fish restaurants line a quayside of fishing boats. Paphos has an air or holiday charm combined with history. The main shopping area is found in the upper part of the town where the buildings are of an olden day classic style. The lower part of the town known as Kato Paphos has a life of its own, close to the sea, the harbor, souvenir shops and several beautiful hotels and surrounded by important archaeological sites.

The recent addition of its own international airport opened up the Paphos area.

Peyia village is located 19 km north west of Paphos. While sitting at one of the local coffee shops sipping Greek coffee you can enjoy the panoramic sea views. In Peyia don't forget to quench your thirst at the picturesque fountains which can be found in the beautiful stone paved village square. 41km from the village, near the fishing refuge, are the ruins of two early Christian basilicas with interesting mosaic floors.

Further to the north the baths of Aphrodite are on most travelers must see list. The grotto where the goddess is said to have bathed is lovely but the glorious Akamas peninsular is unrivalled. Taking time to visit this area either by hiking through it or by taking a jeep excursion is definitely worth a day’s outing.

Further north of the Baths of Aphrodite lies the resort of Polis. Beautiful houses, dating to the beginning of the century can still be seen here. This small quaint town overlooks the charming fishing shelter of Latsi. The relatively unspoilt outlook of the countryside and villages would delight the walker and the naturalist. Due to its excellent climate and beautiful beaches and scenery it is now developing into a popular resort.

Located between Protaras and Agia Napa is the wild, undeveloped peninsular of Cavo Greko. A wealth of rare flora and fauna, dramatic rocks, capes with sea caves, the unique Natural made bridge and the most incredible views make this are a popular place for walkers and snorkelers.

Modern shops and offices stand beside traditional coffee shops and old stores, adjacent streets with traffic lights mix together with small roads that are towered over by venetian style houses, old women wearing the traditional black garb, men sitting outside the local coffee shops playing gammon while the younger generation goes by in the latest fashions.

Beautifully constructed modern day churches overlook the old and crumbling architecture of the older worshiping grounds that house fading mosaics. A drink of coffee in a modern cafe whilst listening to the afternoon church service and the harmonious church bells as they ring out across the old square. This is Paralimni.

Where the old and new seem to work in harmony. Where one has the advantages of a traditional village and the conveniences of a contemporary town. Only minutes away from the busy resorts of Protaras and Agia Napa and the closest beach being in walking distance. The largest town in the eastern southern fringe of Cyprus, there is nothing you can’t find here.

Within an hour’s drive of the main resorts, you can reach the cool forested slopes of the Troodos Mountains, the main wine producing area in Cyprus. It’s among these gentle hills that you’ll come across some of the most stunning countryside.

Vineyards and almond groves give way to orchards of citrus, olives and avocado and at sea level banana plantations. As you enter the tiny villages where the donkey is still the preferred method of transport, you will meet some of the most friendliest and hospitable people on the earth.