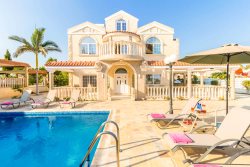 The Seasons Of Cyprus

From ancient times Cyprus was called the island of the sun because the sun shines for 340 days a year. Its climate is considered one of the healthiest in the world. Infectious diseases are practically unknown. The climate of Cyprus never fails to delight its visitors and every season has a charm and beauty of its own.

Summer stretches from May to October and means high temperatures, cloudless skies and cooling breezes from the sea. It's the ideal season for swimming, sunbathing and a whole range of water sports from sailing to scuba diving.
At this time of year, explore the archaeological sites early in the morning or in late afternoon, avoiding the hottest part of the day. It's always a good idea to bring along sun protection, such as sunscreen and a broad-brimmed hat. Even in the height of summer when it's 32C (90F) degrees at the beach (and warmer inland), temperatures are refreshingly cooler in the Troodos, making the mountains ideal for hiking or simply relaxing.
The days of September and October are still sunny and the water warm enough for comfortable swimming. Basically, it's still summer. In Lemesos, the first ten days of September bring the annual Wine Festival, a buoyant period not to be missed.

Toward the end of October evenings do tend to get cooler, however, in October and through November the leaves change colour in the Troodos and vineyards take on gold and crimson hues against a backdrop of crystal clear sunlight. In Cyprus even mid-November can feel like summer, but by the month's end medium-weight apparel for the late afternoons and evenings will enhance the traveller's experience. It is still possible to enjoy swimming, while inland excursions to villages and vineyards for wine tastings can be very enjoyable. Autumn also brings with it the annual Kypria festival, with prestigious local and international musical and dramatic performances at venues throughout Cyprus.

December - February are the months of Mediterranean winter, bringing the possibility of rain, but still an average of six hours of bright sunshine a day. This is the time of year when smaller Mediterranean destinations shut down for the season, but not so Cyprus. The island is a major business centre and has many important heritage sites and museums, all at their least crowded in winter. The cultural calendar is also alive and well throughout the winter, with new events coming all the time. The summer resort of Agia Napa, for example, offers a "Cultural Winter" with classical music concerts and modern and folkloric dance performances. Into early February there is occasional rain, and often snow in the Troodos - ideal for skiing!

Spring in Cyprus is the best. The winters rains bring the countryside to life. February and March are months of verdant colours to savor.

One of the most notable features of Cyprus landscape in February and early March are the trees in blossom. The island is covered in them their delicate white and pink blossom announcing springs arrival.

The other feature of the Cyprus countryside in spring is the masses of yellow flowers. For some reason, the yellow flowers arrive first. By March, the wild flowers are every colour you can imagine.

Cyprus has 1,950 species of flowering plants, 140 of which grow nowhere else but on the island, and in the Akamas alone, there are 700 plant species, of which 40 are endemic